When the node does not turn on or restarts continuously.

There are several types of problems to check in these cases, which will be found between the power network and the LibreRouter board.

If a problem is suspected, go directly to confirm it. If not, an evaluation needs to be done, part by part.

The power source is insufficient, i.e. the battery or PoE transformer is small.

Problems in the home power grid:

Power may be interrupted from the grid or from power grid security systems, such as thermals or circuit breakers.

It may also be a problem with the electrical outlet or extension cord if it is the case. It can easily be tested by connecting anything else that you know is working, a light or an appliance for example. You can also use a multimeter on the outlet to measure the voltage 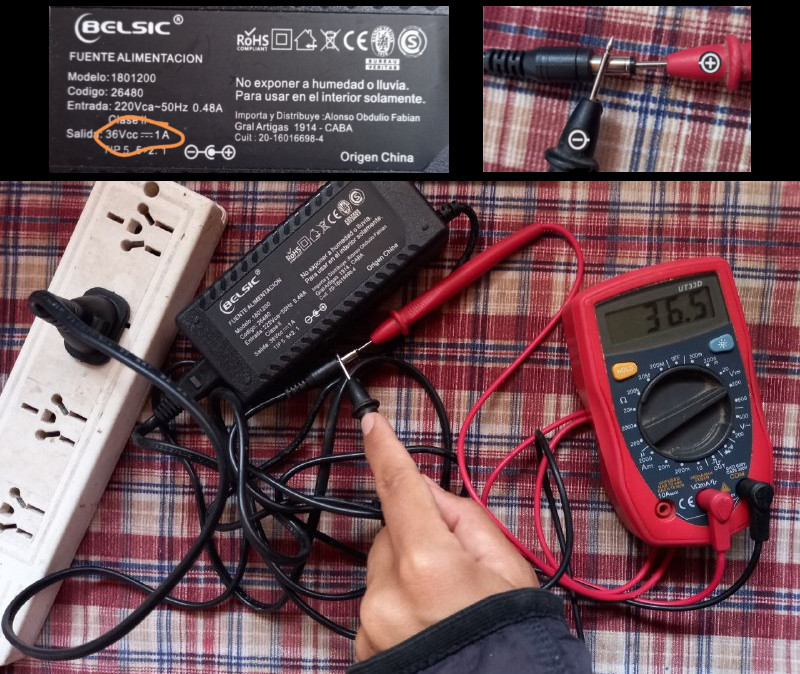 In the battery power system: In cases where the node receives its power from a battery system, check the correct recharging of the battery and the integrity of the system components.

The cable may be visibly damaged, in which case it will need to be neatly cut and reassembled. Before reconnecting it, it is recommended to verify with a multimeter that both poles are not short-circuited. It is also advisable to check the power supply voltage, that is to say, that the Volts that it delivers coincide with the indications on the label. Once it is corroborated that it works correctly, connect it to the LibreRouter. This will prevent damage to the equipment.

Sometimes, not very often, It is believed that the problem is only in the PoE injector. In this situation, continuity can be measured

between its tips. It is not easy since the tester tip and a specific pair of pins on the network connector must make contact without touching the others. But with patience and dedication, it can be done.

Another option is to use a piece of cable with an RJ45 plug connected to the Poe and measure comfortably on the wires at the other end. It is important to assemble the plug well so that it is a reliable instrument (see illustration).

Problems in the network cable:

Check both the plugs and the cable.

With a network cable tester, a quick diagnosis can be performed. Disconnect the cable from its power source first. Separate the two parts of the tester and connect each to each end of the cable. The lights should light up in a complete sequence from 1 to 8. If it is a grounded cable, the ground light should also light up. (For more details check this video.

Cables inside homes are often subjected to movements that can wear them out. Check the integrity of the plugs at both ends of the cable. For example, if it is badly assembled or has been damaged, if it has cut or weakened strands, or if the outer sheath of the network cable does not enter well into the plug. The video recommended in the previous paragraph is also useful for this purpose. Other examples of problems when assembling a network cable can be found in the following list of videos.

There may also be wear or breakage along the cable, mainly in rubbing areas such as behind furniture or on the edges of walls outside the building, check that it has not been damaged by animals or the movement of a tree or any element close to the installation. If this is the case, take new measures so that the problem does not recur after repairing or replacing the cable.

Another common problem with nodes that have not been maintained for some time is that the connectors become dirty or rusty. Depending on the severity, you can either replace the entire chip or wipe it with an alcohol wipe and wait for it to dry before reconnecting.

Breakage or damage to electronic components

Check the LibreRouter from the outside first the appearance of the connector that receives power, if it is sulfated/oxidized if it has insects or dirt. In those cases, clean with an alcohol wipe.

If the problem does not appear to be superficial, remove the equipment from the node and power it up on a table, with the transformator connected directly. This is to make a final check that the problem is not in the wiring. If it turns on, re-check the network cable.

If it still does not turn on, open the protective case of the LibreRouter and inspect the board. Perform an ocular inspection under good light, ideally with the aid of a magnifying glass, looking for irregularities on the surface of the board and components.

If it is confirmed that the problem is on the board, the equipment can be replaced with another one while a person knowledgeable in electronics decides if a repair of the damaged equipment is feasible.

On the PoE transformer and/or PoE injector:

Test the power delivered by the transformer at the output.

First, check the expected output voltage on the label. If the tester gives as result 0 or a number lower than expected, replace the transformer.

In the battery power system:

In cases where the node receives its power from a battery-powered system, check the battery charge and the integrity of the system components.